In Spanish, “arcoiris” translates to “rainbow.” Adding rainbow bowties to their traditional attire, Mariachi Arcoiris de Los Angeles proudly wears a symbol of what they stand for; these wonderful musicians make up the world’s first LGBTQ+ mariachi band. Together, they’re creating incredible music and tackling the issue of gay rights in communities that haven’t traditionally accepted to them. 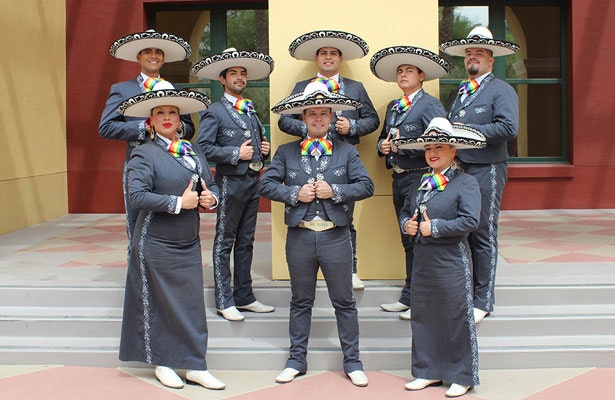 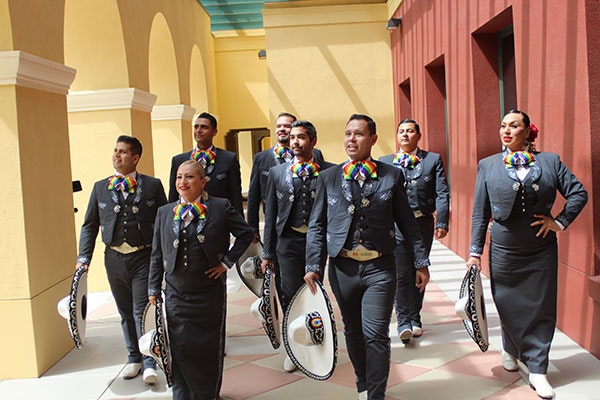 Director Carlos Samaniego says that what helps them is the power of mariachi music, a beloved genre in Hispanic culture. Its distinct and powerful sound is a staple at Mexican events and celebrations, and Mariachi Arcoiris de Los Angeles is a must-see at this year's Summer Sounds concert series on the Julianne and George Argyros Plaza.

After coming out as gay, Samaniego felt as if he no longer belonged in the mariachi scene. He highlights the machismo culture that often surrounds mariachi music, including the lyrics that often discuss how to conquer a woman's love. Because of this, he found it difficult to gain people’s respect, oftentimes being bullied for not liking women.

In 2014, Samaniego assembled a mariachi band to play for a gay pride event at his alma mater. The group was such a success that it attracted the attention of the owner of a Latino gay nightclub who subsequently hired them to play there every week. Thus, Mariachi Arcoiris de Los Angeles was born, but only lasted less than a year.

Still, the idea of creating an entirely LGBTQ+ mariachi band never left Samaniego’s mind. He decided to revive the group in 2016—this time, driven by the homophobic prejudices of their community. With a goal of encouraging LGBTQ+ mariachi musicians to be more open about their identities, the group reunited.

“Mariachi Arcoiris de Los Angeles was created as a haven for mariachi musicians that identify as LGBTQ+ so that we can come together to rehearse and perform our beloved mariachi in an environment free of discrimination, bullying, and bigotry,” says Samaniego. “I created this group as a result of a personal need to have this safe space.”

In building Mariachi Arcoiris, Samaniego called Natalia Meléndez, a childhood friend and transgender woman who was working as a mariachi violinist and singer. In joining the band, Meléndez became the first transgender female performer in the history of mariachi. She has been featured in a two-part special for Univision that depicts her life and struggles as a transgender woman in the mariachi world. As a result of this two-part special, Mariachi Arcoiris de Los Angeles has been invited to perform for three different morning news shows on Univision including the “Lanzate” program. During each one of these presentations, the mariachi group was highlighted because of its special nature in representing the LGBTQ+ community. 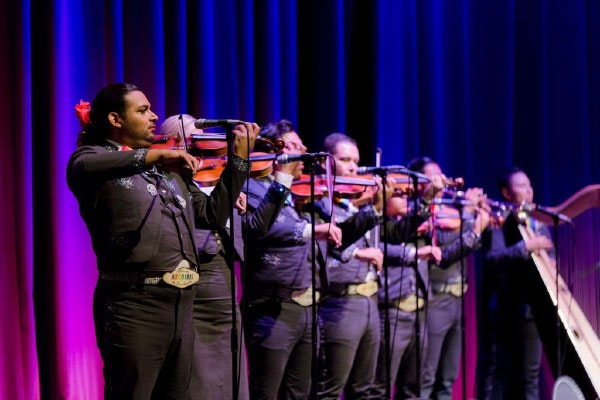 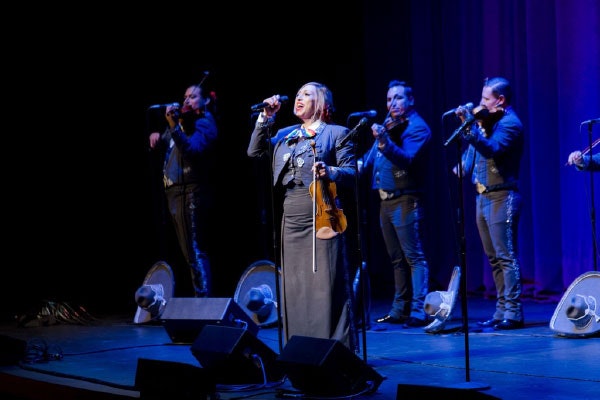 Besides performing at Segerstrom Center for the Arts twice, Mariachi Arcoiris de Los Angeles has also played for numerous pride events across Southern California as well as The Abbey, Club Tempo, Hamburger Mary’s, #SchoolsNotPrisons tour for the California Endowment, and many other LGBTQ+ events. They even perform for many same-sex and “traditional” weddings.

Now a group of 13 LGBTQ+ musicians and singers, Samaniego and Meléndez strive for their group to stay true to the music of their Mexican heritage. They want to keep mariachi alive while being inclusive to LGBTQ+ people. Together, Mariachi Arcoiris encapsulates the social power of music.

“Mariachi music demonstrates our emotions in the best way,” says Samaniego. “The instrumentation of the ensemble allows for the music to be interpreted in any way imaginable. The combination of emotion and musicality sets up the stage for a display of joy, sadness, fear, excitement, and any other emotion to the highest degree!”

Time and time again, Mariachi Arcoiris de Los Angeles continues to touch the hearts of their audiences, indulging them in the timelessness of mariachi music while spreading awareness of LGBTQ+ rights in Hispanic communities and beyond.

Mariachi Arcoiris de Los Angeles is back on the Julianne and George Argyros Plaza on Friday, July 22 at 8pm, and tickets are still available to their incredible show. The concert is free with RSVP and reservations can be made online or by calling the Box Office.